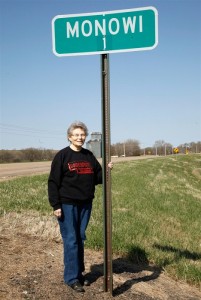 Off Nebraska’s Highway 12 just five miles from the South Dakota border stands a grain elevator, an abandoned schoolhouse and church, and a few vacant homes, the paint now peeling from their wooden siding as the brush and bromegrass grow up high around them.

This is Monowi, a perfectly ordinary prairie village founded in 1902 and given the Indian name for the wildflower we call “snow-on-the-mountain.”

But Monowi is remarkable in one respect: According to the 2010 United States Census, it’s the smallest town in America. Monowi is the nation’s only incorporated place to boast a population of exactly one. Monowi, Nebraska is, for now, one of a kind.

When the Chicago & Northwestern Railroad was built through the area at the start of the 20th century, Monowi was a boom town, with its own post office and a cattle-loading facility that brought ranchers from miles around.

But as the century wore on, railroad traffic slowed and prairie fires burned the town down on two separate occasions.

Young people moved to other towns with better job prospects, and by 1980 only 18 residents remained. In the 1990 census, that number was down to eight, and by 2000 it was just Rudy Eilers and his wife Elsie, who bought the local tavern in 1971.

He was the town’s unofficial mayor, and she was the treasurer.

“We were going to put up a sign that says: ‘Monowi, a town of good people and one grouch,’” Elsie told a reporter in 2001. “We could take turns.”

The last event at the town church, was the funeral for Elsie’s father fifty years ago.

Elsie works at the tavern where she claims she serves the coldest beer in town. Of course, she is the only employee and it’s the only beer in town, so business is good.

She serves the local peoples and people passing through who decide to stop. 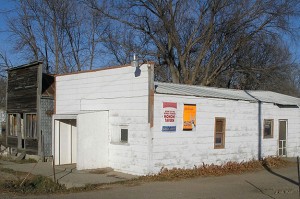 Rudy died of cancer in 2004, leaving Elsie to run the tavern—and the town—alone. She continues to serve burgers and drinks (as mayor, she grants herself a liquor license every year) to truckers and farmers from the area, and every year she pays taxes to herself and secures state funding for the village’s street lights. She also runs the town’s library, a plywood shed containing Rudy’s disorganized book collection, which she lends out on the honor system. The library holds 5,000 books, which means Monowi probably has the highest books-to-people ratio in the nation.

The streets of the town don’t really look like streets. They are overgrown with grass and weeds, and look more like little pathways.

Monowi has always been a small town. Even back in the 1930s there were only 150 people living there.

However, now it’s a very different scene. For example, the town school hasn’t had any children there in three decades.   Elsie spends some of her time in the library which has 5,000 books stored in it. Most of them belonged to her late husband, who by the way, she met in elementary school in this same town when she was a little girl. 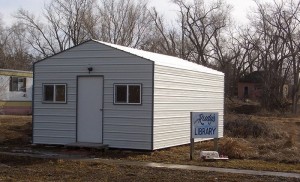 Don’t feel sorry for Elsie though. She stays there because she wants to, and she loves it! She is even the town mayor. One year she raised taxes on herself so she could repair four streetlights. She knows that when she can’t care for herself anymore, she will have to leave the town like everyone else, but until that day comes, she will enjoy the cold beer and the notoriety of being the town’s only resident.

Elsie Eiler is the most admired person in Monowi, Neb. She is also the smartest, wealthiest, best-looking and youngest.

“And the oldest,” she is quick to add.

When you are the only resident of a community, every title fits.

When you get to Monowi stop at the Monowi Tavern, have something to eat and tell Elsie you saw this here. 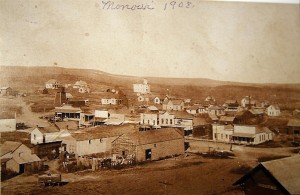 Please give us a review of your experiences in Monowi